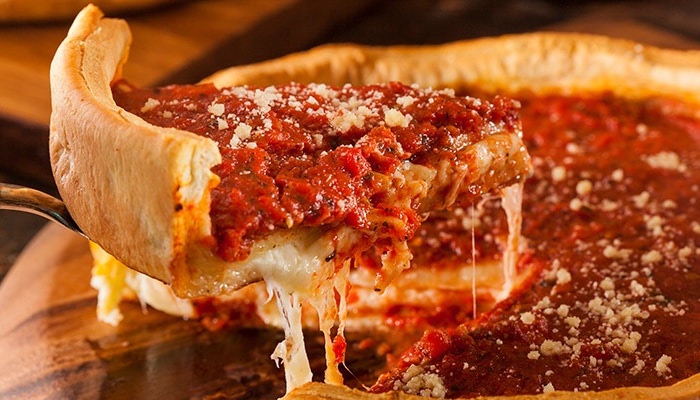 Many people understand the advantages of using pre-made dough balls, but did you know just how many styles of pizza you can make from them? In the past, we’ve shown you how to use dough balls for styles like hand-tossed and wood-fired pizzas. This time, Chef Luke from Alive & Kickin’ Pizza Crust shows off just how easy it is to tackle signature pizza styles of Take ‘n’ Bake, Detroit-style and Chicago-style deep dish pizzas — all using pre-made dough balls.

Start with a proofed dough ball. The one I’m using was in the refrigerator for two days and then set on the counter for about 30 minutes to soften.

Flour the counter and top of the dough ball. Work the dough into a circle, pressing an edge all the way around the pizza.

Pick up the edged crust and hang it on your knuckles – a move that looks difficult, but is really easy for beginners or veteran pizza makers. Use your knuckles to start working the dough around to stretch it out.

Once stretched, simply set the dough ball crust into the take ‘n’ bake tray. Be careful not to put the crust over the flat edge of the tray, but press the crust right inside of it. Make sure you get all of the air bubbles out of the crust so your patrons can take their pie out the door and have an awesome pizza right at home.

Since proofing will take place in the pan, begin with a thawed dough ball. Select a rectangular or square, deep, hard anodized pan – the signature shape of a Detroit-style pie. Another key part of the Detroit-style is brushing the pan bottom and sides with melted butter or margarine.

Place the thawed dough ball in the middle of the pan and, to keep it from getting dry (and to add a little more flavor), brush the top with the melted butter or margarine you used in the pan. The key is to let the dough ball proof until it is soft and provides the desired cell structure. The pre-made dough ball I’m using is a Dough Shop® by A&K Hotel & Restaurant Flour Dough Ball. It has extra yeast and extra sugar that makes it some of the fastest proofing dough you’ll find.

Let the dough ball sit on a counter for six to eight hours at room temperature. Once it puffs out and gets nice and soft, push the dough ball into the corners of your pan until it’s nice and flat. Some of the melted butter or margarine on the edge of the pan will show, and you’ll want to see all of the cell structure or bubble in the dough. Make sure the crust is patted into the pan, and you’re ready to top it.

Detroit-style is known for brick cheese, quite a difference from what most people are used to on pizza. Place a good amount of cheese directly on the dough, making sure it’s close enough to the pan edge to stick so it caramelizes. Then, spoon on diagonal rows of hearty tomato sauce – use one with robust spice notes and a little bit of garlic, like Arthur Avenue Ready To Use Pizza Sauce. Between the sauce rows, place slices of pepperoni so they char a little and get caramelized. Your Detroit-style pie is now ready for the oven.

Brush a round pan with melted margarine, olive oil or butter. Place your dough ball in the pan and brush the top with the melted butter or margarine you used in the pan. Wrap up the pan and let it sit until the dough ball is room temperature, usually six to eight hours depending on the size.

Once the dough ball is proofed and ready to work, pat it out into the pan and form a high, thick, raised edge, equivalent to the height of the pan lip, so it can hold all the stuffing. Make sure the dough is pressed firmly into the pan and it doesn’t have any give.

In keeping with the traditional Chicago-style pie, use raw sausage, so it infuses the dough with flavor as it starts to bake. Work the sausage along the dough. Don’t worry that you’ll lose cell structure, as the dough will be fully proofed before you press the sausage on top of it. The crust will come out light, airy, buttery and crisp on the bottom.

The next ingredient is the cheese, which sits on top of the sausage and under the sauce. Don’t be shy with the shredded mozzarella! You don’t want to see any sausage through the cheese layer. You may want to consider using sliced cheese instead of shredded to ensure coverage, but either one works well.

Now, the sauce goes over the top. Typically, we sauce a crust starting in the middle, but we don’t want to mess up the cheese on this pie, so spoon it on and then gently smooth it out to your crust edge. You’ll see a little bit of cheese through the sauce, and that’s okay.

Your pizza is ready for baking! It’s important to remember that this isn’t a fast, casual pizza. Give yourself plenty of time to make a really good pie. Not many people can pull off an awesome Chicago-style pizza outside of Chicago. If you can, you’ll get people coming back all the time.

Signs of a Proper Bake

Notice I have to cut the Detroit-style pizza out of the pan. That’s exactly what you want — to have it stick to your pan a little bit. Running a knife along the edge will release the caramelized cheese and other ingredients. Once out of the pan, the caramelized pie edges will appear very dark to almost black in spots. It’s close to, but not burned – however, it won’t taste burned. Cutting into the crust, you’ll see a nice cell structure with big, open crumb and cells, and the cheese will have soaked in a little. Finally, the top is nice and golden brown. It doesn’t get better than that!

A cross-section of a Chicago-style pie will reveal a thick layer of ingredients, including perfectly cooked sausage that stays intact atop a well-structured crust with that classic thick, raised edge.

Dough Balls Are a Versatile Solution for Any Menu

Patrons know what they want – and what to expect – when they order take ‘n’ bake or either of the favorite pizza styles hailing from the Midwest. Pre-made dough balls give you the most latitude to delight any crowd, from convenience store frequenters to restaurant chain fans.

Exactly how much is making your own dough costing you? Use our Pizza Dough Cost Calculator to arrive at a final per-dough-ball cost!

Pizzeria Consultant
Dan is a hugely important slice of Alive & Kickin’ (see what we did there?). He started in the pizza business when he was just 14 and eventually opened his own chain of restaurants, supplying his own dough balls for each of them. He expanded to supplying dough products to other operations, then founded the Dough Shop®. Alive & Kickin’ was thrilled to acquire the Dough Shop® in 2015. 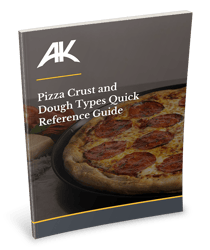